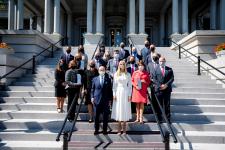 In July 2018, President Trump launched the Pledge to America’s Workers, an initiative aimed at increasing the private sector’s role in training American workers for American jobs. By signing the Pledge, companies and trade groups commit to creating new or enhanced education and training opportunities for American students and workers, from high-school age to near-retirement. Since the launch of the Pledge, more than 450 organizations have signed on, committing to over 16 million job training opportunities for Americans over the next five years.

The Pledge to America’s Workers was established as the United States was in the midst of a historic economic expansion. The unemployment rate reached the lowest level on record for many demographic groups, and companies struggled to fill open jobs. The COVID-19 pandemic has disrupted the lives and livelihoods of American workers and businesses in unprecedented ways. As states and communities work to contain the virus, and as the country re-opens, companies have had to re-assess. Businesses, government, and educational institutions share the goal of expediting American workers’ return to employment and upward mobility. Access to training and upskilling programs is essential for many Americans to make that return, and employers’ training investments in new and incumbent workers are an essential element of our country’s education and training system. Although economic conditions have changed, the Pledge to America’s Workers is as important as ever.

The Department of Commerce, in partnership with the National Institute of Standards and Technology’s Baldrige Performance Excellence program and with support from the Department of Labor, created a new Presidential Award to recognize organizations demonstrating excellence in workforce training through their Pledge to America’s Workers commitment. This program supports two Executive Orders. The first is Executive Order 13853 titled “Establishing the President’s National Council for the American Worker” which directed the newly established National Council for the American Worker (Council) “to work with private employers, educational institutions, labor unions, other non-profit organizations, and State, territorial, tribal, and local governments to update and reshape our education and job training landscape so that it better meets the needs of American students, workers, and businesses.” The order also calls to “develop a plan for recognizing companies that demonstrate excellence in workplace education, training, and re‑training policies and investments, to galvanize industries to identify and adopt best practices, innovate their workplace policies, and invest in their workforces.” The second is Executive Order 13801, “Expanding Apprenticeships in America,” which aims to “provide more affordable pathways to secure, high paying jobs by promoting apprenticeships and effective workforce development programs.”

On September 23rd, nine outstanding organizations were received the inaugural Pledge to America’s Workers Presidential Award by Advisor to the President Ivanka Trump and U.S. Secretary of Commerce Wilbur Ross at a ceremony held in the Eisenhower Executive Office Building.

Each of the Pledge organizations’ applications demonstrated excellence as determined by a panel of Federal evaluators applying Baldrige-based criteria for organizational maturity in workforce education and training.

Created by Congress in 1987, the Baldrige Program is managed by the National Institute of Standards and Technology (NIST), an agency of the U.S. Department of Commerce. This unique public-private partnership is dedicated to helping organizations improve their performance and succeed in the global marketplace. The program also administers the Presidential Malcolm Baldrige National Quality Award.

NEXT - Cybersecurity Strength through Apprenticeships