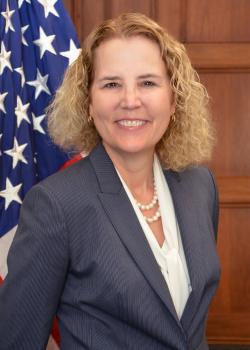 Wynn W. Coggins serves as the Acting Chief Financial Officer and Assistant Secretary for Administration (CFO/ASA) to support efforts to further the Department’s mission of creating the conditions for economic growth and opportunity.

Acting CFO/ASA Coggins was formally the Acting Secretary for the Department of Commerce after she was named by President Joseph R. Biden on January 20. 2021 to serve in that role. On March 3, 2021, Ms. Coggins became the Acting Deputy Secretary. The Commerce Department has an $11B annual budget, 12 operating units, and 47,000 employees.

Prior to these roles, Ms. Coggins was the Deputy Assistant Secretary for Administration, implementing and executing the management, mission-enabling, and administrative functions for the U.S. Department of Commerce.

Ms. Coggins has over 30 years of Federal government experience and has held a variety of leadership and operational roles throughout her career. She served as the Department’s Acting Executive Director for Enterprise Services, overseeing human resources, information technology, and acquisition of shared-service solutions across the Department. Ms. Coggins also served as the Chief of Staff and principal advisor to the Deputy Under Secretary of Commerce for Intellectual Property and Deputy Director of the United States Patent and Trademark Office (USPTO), supporting the implementation and execution of the operations, policies, priorities, and programs for the agency. Prior to her Chief of Staff role, she held multiple leadership roles within the USPTO, including serving as the USPTO Deputy Chief Administrative Officer.