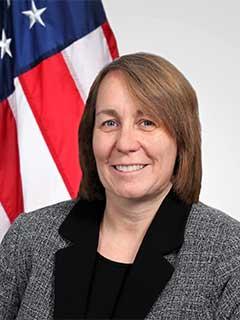 Peggy E. (Peg) Gustafson was sworn in as the Inspector General of the U.S. Department of Commerce on January 9, 2017.  Ms. Gustafson was nominated by the President in March 2016 and confirmed by the Senate on December 10, 2016.  Ms. Gustafson will lead a team of auditors, investigators, attorneys, and support staff responsible for reviewing and improving the Department's business, scientific, economic, and environmental programs and operations.

During her tenure as Chair of the Legislation Committee for the Council of Inspectors General on Integrity and Efficiency (CIGIE), Ms. Gustafson worked with lawmakers on legislation to ensure the continued independence of Inspectors General, including the Inspector General Empowerment Act of 2016, which passed Congress and was signed into law in December 2016.

From 1999-2007, Ms. Gustafson served as General Counsel in the Missouri State Auditor's Office. In that capacity she worked closely with the auditors on issues of the scope of their duties, the auditors' need to access records, and all other legal issues arising in the course of the audits. Ms. Gustafson also served as an assistant prosecuting attorney for Jackson County, Missouri, serving as the Chair of the Insurance Fraud Task Force, and as an assistant county counselor for Jackson County.

A native of Chicago, Illinois, she received her B.A. from Grinnell College in Grinnell, Iowa in 1989, and her Juris Doctor from Northwestern University in Chicago in 1992.