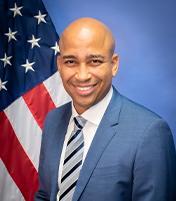 Miguel serves as the Acting National Director for the Minority Business Development Agency at the Department of Commerce.

His 20-year professional trajectory in business and financial services was shaped by his time with GE Capital, where he structured multi-billion dollar transactions and led general management efforts in the corporate lending space, in roles such as Managing Director leading the working capital lending business in Mexico and Head of Strategy for GE’s commercial finance division in Latin America.

Following GE’s decision to exit financial services, as Director of Merger & Acquisitions, he led the $2.4 billion dollar divestiture and negotiation of the company’s corporate jet financing business sold to Carlyle and Blackstone in 2016. Known as a disciplined leader effective at handling complex issues, Miguel started his career with GE’s rotational management program and has held assignments all over the world, including Tokyo, Budapest, Mexico City, and across the United States. He is a certified six-sigma green belt manager.

In 2018 Miguel returned to Puerto Rico following the devastation left by Hurricane Maria to support the island’s recovery efforts via social impact projects such as Puerto Rico Live, a platform he co-founded that host live conversations with world leaders that inform, entertain and inspire.