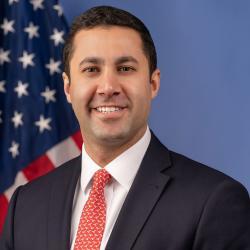 Prior to joining the International Trade Administration, Mr. Joe Semsar served as the Chief of Staff to the Deputy Secretary of Commerce. In this role, he was actively engaged in all aspects of running the 47,000 employee Department, including both interagency and intra-agency management, oversight, and policy initiatives. He served as the Deputy Secretary's primary advisor on the Administration's trade agenda, encouraging free and fair trade, addressing trade barriers, ensuring trade enforcement, as well as advising on export controls, Entity List filings, actions under the Committee on Foreign Investment in the United States, and Section 232 cases. Mr. Semsar also engaged in high-level commercial bi-lateral dialogues and served as a senior advisor for the Department's engagement in the Administration's Prosper Africa trade and investment initiative.

Prior to his tenure at Commerce, Mr. Semsar served at the United States Office of Personnel Management's Office of the Director as the Deputy Chief of Staff and Acting Communications Director.

Before joining the Administration, Mr. Semsar worked for Deloitte Consulting LLP's Federal Practice, serving a diverse array of clients. He is a Teach for America former staff member and corps member alumnus, where he earned a Teacher of the Year award.

Mr. Semsar holds a Master of Public Administration degree from the University of Pennsylvania's Fels Institute of Government and Bachelor of Arts degree from Clemson University.