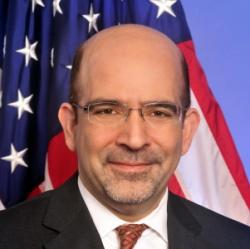 Benjamin Friedman is NOAA's Deputy Under Secretary for Operations. He serves as the agency’s chief operating officer and is responsible for the day-to-day management of the agency's national and international operations for oceanic and atmospheric services, research and coastal and marine stewardship.

This is Ben’s third position within NOAA, having previously served as NOAA’s Deputy General Counsel and as Chief of the Office of General Counsel’s Enforcement Section. He brings more than 14 years of federal management and leadership experience to his current role.

Ben is a 1989 graduate of Vanderbilt University with a B.S. in Molecular Biology and a 1993 graduate of Emory University Law School and the Emory School of Theology, where he earned a Masters in Theological Studies. He is a native of Nashville, Tennessee, but has called the District of Columbia home for the last 24 years.